By Janet L. Keyes, CIH and Carol A. Keyes, CSP

Technicians are learning how to work on electric vehicles without getting shocked. They remove the key and put it far enough way to ensure the car won’t start up unexpectedly. They disconnect the power source, wearing electrical insulating gloves and safety glasses when doing so. They allow the capacitors to discharge and don’t push the car, so the charge can’t rebuild. They ask the customer to turn off any app that can start the vehicle.

Do they take the same care to avoid being shocked by everyday things? But wait! Electric vehicles are high voltage. Surely we don’t need to worry about ordinary voltage of a box fan or a lamp?

It takes half an amp to light a 60-watt light bulb or to make a box fan run. Two one-hundredths of an amp will leave you clutching a live wire, unable to let go. One tenth of an amp can disrupt your heart’s rhythm. Half an amp can kill after only a second of contact. 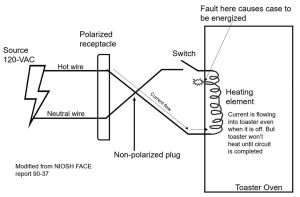 What happened? The toaster oven had a non-polarized plug. It was plugged into a polarized outlet, resulting in reversed polarity – even when the toaster oven was off, current was going through the heating element. The heating element was damaged, causing it to be in direct contact with the casing of the oven. When the sweaty worker’s arm touched the oven, the current flowed from the toaster, through him, to the grounded air conditioner. Electricity is an opportunist. It will take the easiest path to ground. The human body is a very good conductor of electricity.

It’s rare for us to not find electrical hazards when we do walkthroughs. Ungrounded fans? Common. Missing grounding pins? Common. Insulation separating from plugs? Common. Damaged cords wrapped with electrical tape? Common. Why do we see these? Because people don’t look for damage. They underestimate the danger. They think they know how to make repairs, but don’t know how to make them correctly.

Check equipment before you use it. Handle cords with care. Protect them from damage and stress. Don’t run them through doorways or walls. Unplug them and hang them up when you’re done with them. Don’t coil or bend them tightly. If they start curling up on you, take the time to untwist them. If they are damaged, replace them. Wrapping them with electrical tape isn’t repairing them, because electrical tape lacks the flexibility and insulating ability of the original cord jacket.

Grounding pins break off pretty easily, especially if cords are yanked out of outlets. Instead, grab the plug to unplug them. That grounding pin provides a better path to ground than your body does, reducing your risk of getting shocked.

For wet areas, such as detailing, use a GFCI-protected circuit for all electrical tools. A GFCI (ground fault circuit interrupter) detects a current leak of five thousandths of an ampere or more. If the electrical current is going where it shouldn’t be going, such as through your body, a GFCI shuts off the circuit.

Don’t overload circuits or power strips. Power strips are intended for low amperage loads only. They’re fine for computers, phone chargers, or battery chargers. They are not suitable for heat guns, coffee makers, toaster ovens, refrigerator, or anything else that heats up or cools down, because those have too high a power draw.

Be very cautious about doing your own repairs. OSHA requires that electrical work be done by a “qualified person,” someone with the training and experience to know the hazards and to do the job correctly. Your technicians become qualified persons for work on electric vehicles when they receive I-CAR or manufacturer’s training on that work. If they haven’t received training on other safe electrical work practices, they aren’t qualified to do that other work.

Replacing a plug on a damaged extension cord is easy to do. But if you get it wrong – for instance, reverse the wiring of the hot and neutral – you just created the same reversed polarity hazard that killed the Bethlehem Steel employee. Replacing the cord on a damaged tool might be easy to do, but unless the manufacturer says you can repair it, opening up the tool case voids the UL listing.

Electrical systems have become safer because the codes and standards have evolved to make them safer. But they are only safer if you don’t try to bypass safety measures. Leave wiring to the pros; treat electricity with respect.

This article originally appeared in AASP News (January 2022).  It is intended to provide general information (no advice) about current safety topics. To discuss your specific concerns and how CHESS may help, please contact CHESS at 651-481-9787 or chess@chess-safety.com.