By Janet L. Keyes, CIH and Carol A. Keyes, CSP

If you could eliminate a hazard, would you do it? The expected answer is, “Of course I would!” But the real answer is, “It depends.” You weigh the trade-offs. Get rid of all flammable paint, and you eliminate the hazard of vapors starting a fire. Eliminate vehicle lifts, and you eliminate the risk of a car falling off one. But you can’t refinish cars if you can’t paint, and nonflammable clear coats are hard to find. Getting rid of lifts certainly eliminates one potential hazard, but replaces it with others. If employees need to work under vehicles, they’ll either try to work in that cramped, dark space underneath or they’ll use jacks. Are jacks safer?  I don’t think so. 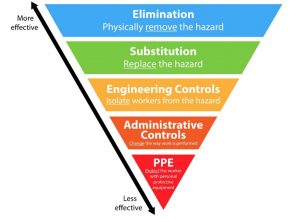 We won’t ask you to eliminate all hazards. That’s futile. A more practical approach is to use the hierarchy of controls. Eliminate the hazard if you can. Substitute – use something similar but safer.  Use engineering controls to separate people from the hazard. Change the way work is done – administrative controls. And if none of those will do the job, resort to requiring personal protective equipment (PPE).

Why is PPE the last choice? It’s the least effective. It only protects one person, the person using it. And it only protects if used correctly.  It’s often the most cumbersome to use. And, the most difficult to enforce.

Walk into your shop. How many people doing noisy tasks are using hearing protection? If you think they don’t need it, go talk to them. Do they have to stop what they’re doing to converse? If so, protection was needed. Why aren’t they using it? “It’s uncomfortable.” “It’s hot.” “It’s inconvenient.” “It didn’t seem that loud.” See the problems with relying on PPE?

If you can substitute a less hazardous chemical or way of doing a task, you reduce the risk to employees. Using a vehicle lift is a good substitute for relying on jacks, jack stands and chocking wheels. The lift must be in good condition, have working safety latches, and be used correctly. Given that, it’s less likely to drop a car onto an employee’s head than some poorly placed hydraulic jacks. Changing to waterborne base coats is another example of substitution. The waterborne paints are not free from hazards, but they greatly reduce the fire and health risks.

Elimination is the most effective measure, but the hardest one to do. Do you need to use that chemical at all? Can you stop doing that task?

Do you have a sandblaster in your shop? How can we use the hierarchy of controls with that?

You could use PPE to protect against the noise, the very high dust levels, and the particulates flying around. The only type of protection OSHA allows for abrasive blasting is a type CE airline respirator – a helmet connected to a clean air supply. We’ve never seen that type of respirator in body shops. The hood we often see does not provide enough protection against the dust levels.

You probably limit how much time is spent blasting. That can be effective – if you aren’t using silica or coal slag (the black products). Coal slag contains a trace amount of beryllium, which can cause a progressive and disabling lung disease. Dust levels can be so high during blasting that only four minutes could result in overexposure to beryllium. Less than a minute can cause overexposure to silica. This time, administrative controls may not be the best option.

Instead of blasting out in the open, you could change the type of equipment. Cabinet blasters contain and capture the dust. As long as the cabinet is maintained in good condition (an administrative control!) and used with a dust collection system, your employee can blast away without eye protection, without respiratory protection, and without fear of being overexposed.

If you want to keep doing a lot of blasting, you could switch to wet blasting, using pressurized water with or without blasting media mixed in. The water isn’t enough to create puddles, but it is effective at keeping dust levels down.

You could substitute a different blasting media than silica sand or coal slag. This is one of the easiest measures to implement. Silica sand and coal slag are the cheapest abrasives, but unless you’re doing a lot of blasting, the cost difference is insignificant – and a lot less than the cost of lung damage.

Maybe you can eliminate blasting altogether. Grinding off rust has its own hazards, but it isn’t as noisy as blasting and doesn’t create the same lung hazard.  Many shops have figured out how to avoid this task completely.

Abrasive blasting is just one example of using the hierarchy of controls. You can probably come up with more. Are you using a very corrosive wheel cleaner? Could you switch to something that is not as nasty? Can you encourage employees to buy quieter tools? That could reduce the need for hearing protection. Make personal protective equipment your last line of defense, when all the others aren’t quite enough. Don’t make it your first choice.